While disordered eating may look like a lifestyle choice that simply requires behaviour modification, akin to addiction issues, successful treatment can not occur without an exploration of one’s social constructs and reconciling one’s trauma.  Eating disorder symptoms often reflect developmental processes (such as puberty), and life transitions (such as going to university).  However, the “seeds” giving rise to these symptoms often have been “planted” much, much earlier.

Comparable to substance abuse disorders, eating disorders are typically long-term problems that involve relapse and are life-threatening; they also involve what are known as the “3 C’s”:

Compulsive Use (to avoid or alleviate negative emotions)

Loss of Control (unable to stop; cravings to continue the behaviour)

Continued Use (despite negative consequences)

Eating disorders are complex, and usually require a multidisciplinary team of professionals to effectively treat them.  Success is possible; about 70% of clients with anorexia nervosa eventually recover.  However, recovery can be a long journey – one that takes 6-7 years on average, with expected relapses.

Early treatment greatly contributes to successful recovery. Eating disorders are often kept secretive for far too long.  It is my hope that with celebrities such as Russell Brand, Sophie Trudeau, and Lady Gaga sharing their personal struggles with disordered eating and anxiety, it will incite others to seek needed support and early treatment.

FOR HELP WITH EATING DISORDERS:

This book comes recommended by a dear client: 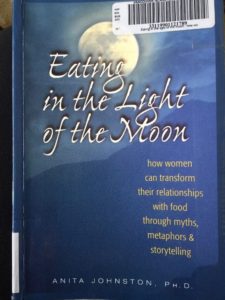