The term cognitive dissonance is used to describe the feeling of discomfort that results from holding two conflicting beliefs.  It is experiencing an inner conflict denoted by an inconsistency between beliefs and behaviours – it is what can make us feel like a fraud.

Cognitive dissonance is a theory proposed by psychologist Leon Festinger who asserted:

people strive to achieve a sense of internal consistency by having their beliefs, attitudes, and behaviours align.  Inconsistency of conflicting beliefs lead to disharmony and an aversive sense of mental tension – something must change in order to reduce the dissonance.

We have all experienced varying levels of cognitive dissonance. Cognitive dissonance can occur in many areas of life, but it is particularly evident in situations where an individual’s behaviour conflicts with beliefs that are integral to his or her self-identity.

Okay, you get the idea.  The “weightiness” of dissonance a person experiences is dependent on several factors, such as how highly a belief is valued and the degree to which the beliefs are inconsistent.  Elements of the dissonance can be influenced by the following factors:

It is easy to see that cognitive dissonance is alive and well: globally, societally, interpersonally, and within ourselves (internalized shame is a contributing factor to an inability to accepting unpleasant truths about ourselves -for more on mitigating shame, see here: https://blacksheepcounselling.com/2017/09/shame/).

How Can We Reduce Cognitive Dissonance?

Conflicting beliefs can be held at the same time, often without one realizing it.  I believe in the adage, when we know better, we do better.  When we choose to become aware of phenomena like cognitive dissonance, we can use this as a tool for self-exploration and growth, contributing to our ability to journey to our preferred Self – sounds to me like a worthwhile belief to hold. 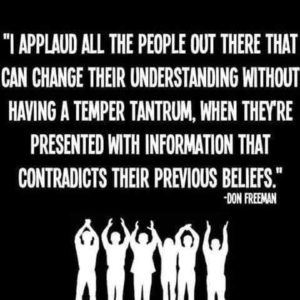